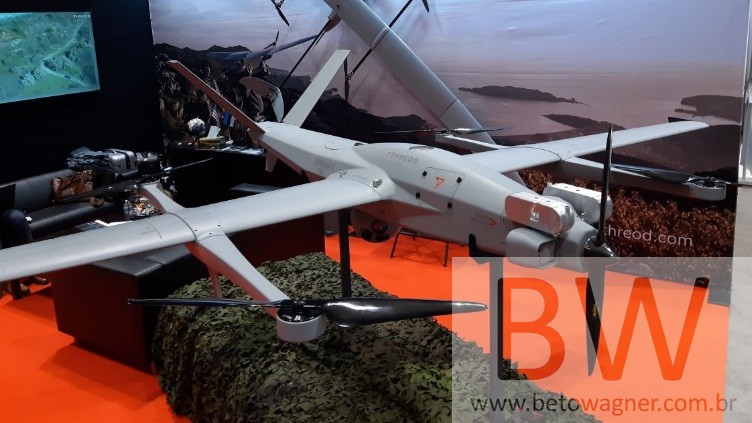 Threod Systems’ Stream C vertical takeoff and landing (VTOL) unmanned aerial vehicle (UAV) has roughly five hours endurance while the fixed-wing version has about six hours. The aircraft was on display on 2 May 2019 at the AUVSI Xponential conference in Chicago. Source: IHS Markit/Pat Host

Siim Juss, Threod business development manager, told Jane’s on 2 May that this capability will allow a user to spot handheld radios and similar technologies on the ground. Threod had its Stream C VTOL aircraft on display at the 2019 AUVSI Xponential conference.

Stream C VTOL is the upgrade version of the previous Stream C fixed-wing aircraft. The VTOL variant, which features removable quadcopters on the wings, has about five hours endurance while the fixed-wing version has six hours flight time.

Juss said these options give a customer the choice of longer endurance with the fixed-wing aircraft, launched by a catapult, or the VTOL launch capability for crowded spaces or urban areas. The Stream C fixed-wing variant lands upside down via parachute capability to protect the retractable gimbal.

The Stream C VTOL is powered by an air-cooled two-stroke petrol engine and has two small mufflers on the front to reduce noise. Juss said Threod chose a petrol engine as it provides the most power efficiency. The aircraft has roughly 42-50 kg maximum takeoff weight (MTOW). Juss said the fuel tank size can be customised but that the standard is 7 litres.

The aircraft has a communication radius of 150 km line of sight (LOS) and over 250 km with range extension. The Stream C VTOL has an operational altitude of 9,843 ft above ground level (AGL).

Juss declined to say if Threod has sold Stream C VTOL to any militaries but said the company works in the military and law enforcement domains. Threod announced in December 2018 that it integrated the VTOL capability onto the Stream C fixed-wing variant.