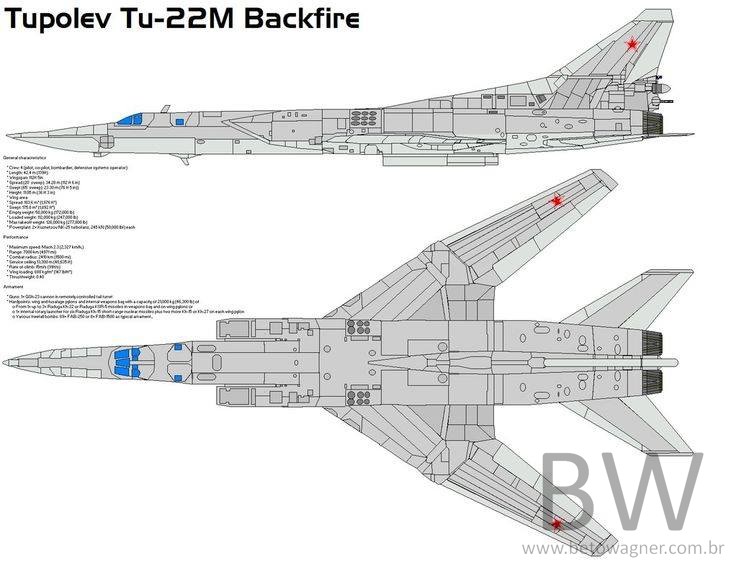 The Tupolev Tu-22M (Russian: Туполев Ту-22М; NATO reporting name: Backfire) is a supersonic, variable-sweep wing, long-range strategic and maritime strike bomber developed by the Tupolev Design Bureau. According to some sources, the bomber was believed to be designated Tu-26 at one time. During the Cold War, the Tu-22M was operated by the Soviet Air Forces (VVS) in a missile carrier strategic bombing role, and by the Soviet Naval Aviation (Aviacija Vojenno-Morskogo Flota, AVMF) in a long-range maritime anti-shipping role.[2] Significant numbers remain in service with the Russian Air Force, and as of 2014 more than 100 Tu-22Ms are in use. 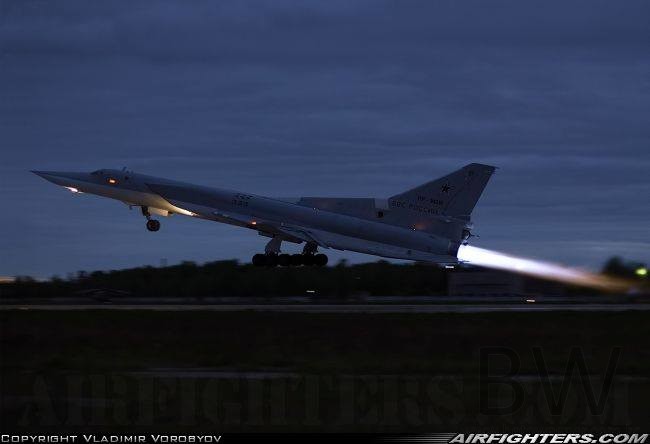 In 1962, with the introduction of the Tu-22, it became increasingly clear that the aircraft was inadequate in its role as a bomber. In addition to widespread unserviceability and maintenance issues, the Tu-22’s handling characteristics proved to be dangerous. Its landing speed was some 100 km/h (60 mph) greater than previous bombers and it had a tendency to pitch up and strike its tail upon landing. It was difficult to fly, and had poor all-round visibility. In 1962, Tupolev commenced work on major update of the Tu-22. Initially, the bureau planned to add a variable-sweep wing and uprated engines into the updated design. The design was tested at TsAGI‘s wind tunnels at Zhukovsky.

During this time, Sukhoi, traditionally a designer of fighter aircraft, developed the T-4, a four-engine titanium aircraft with canards. A response to the XB-70, it was to have a cruise speed of 3,200 km/h (2,000 mph), requiring a massive research effort in order to develop the requisite technologies. Not to be outdone, Tupolev, whose expertise is with bombers, offered the Soviet Air Force (Voyenno-Vozdushnye Sily, VVS) a massively updated version of the Tu-22.

Compared to the T-4, it was an evolutionary design, and thus its appeal laid in its simplicity and low cost. However, the Soviet government was skeptical about the need to approve the development of a replacement aircraft so soon after the Tu-22 had just entered service.[7] The Air Force and Tupolev, in order to save face with regards to the Tu-22’s operational deficiencies and to stave off criticisms from the ICBM lobby, agreed to pass off the design as an update of the Tu-22 in their discussions with the government. The aircraft was designated Tu-22M, given the OKB code “Aircraft 45”, and an internal designation of “AM”. Their effort was successful as the government approved the design on 28 November 1967, and decreed the development of the aircraft’s main weapon, the Kh-22. The T-4 itself would make its first flight in 1972, but was later cancelled.

As in the case of its contemporaries, the MiG-23 and Su-17 projects, the advantages of variable-sweep wing (or “swing wing”) seemed attractive, allowing a combination of short take-off performance, efficient cruising, and good high-speed, low-level flight. The result was a new swing wing aircraft named Samolyot 145 (Aeroplane 145), derived from the Tupolev Tu-22, with some features borrowed from the abortive Tu-98. The Tu-22M was based on the Tu-22’s weapon system and used its Kh-22 missile. The Tu-22M designation was used to help get approval for the bomber within the Soviet military and government system.

The Tu-22M designation was used by the Soviet Union during the SALT II arms control negotiations, creating the impression that it was a modification of the Tu-22. Some suggested that the designation was deliberately deceptive, and intended to hide the Tu-22M’s performance. Other sources suggest the “deception” was internal to make it easier to get budgets approved. According to some sources, the Backfire-B/C production variants were believed to be designated Tu-26 by Russia, although this is disputed by many others. The US State and Defense Departments have used the Tu-22M designation for the Backfire.

Production of all Tu-22M variants totalled 497 including pre-production aircraft. 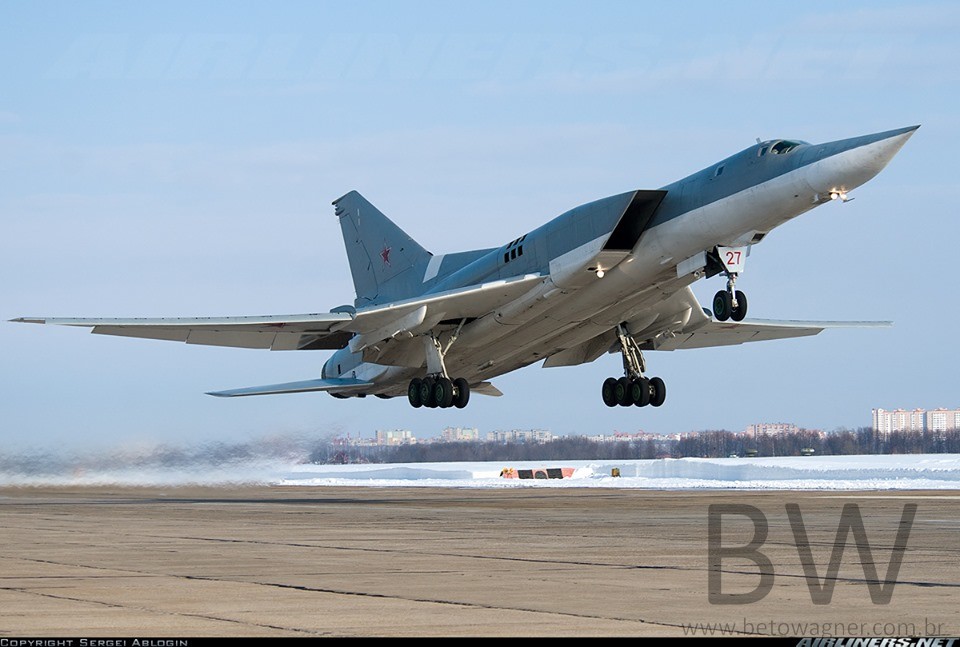 A contract for a full mid-life upgrade, the Tu-22M3M was signed in September 2014. The aircraft is to receive a further modified NV-45M radar, together with new navigation equipment and a modified flight control system. A new self-defense electronic radar suit is fitted, replacing the tail gun of the existing Tu-22M3. Much of the new avionics are shared with the upgraded Tu-160M2.Armament is planned to be enhanced by adding the new Kh-32 missile, a heavily modified version of the current Kh-22, the subsonic Kh-SD, the hypersonic Kh-MT, or the Kh-47M2 Kinzhal missiles. Deliveries of the Tu-22M3M are expected to begin in 2021.

A separate, simpler, upgrade program (SVP-24-22) is being carried out by the company Gefest & T, based on avionics developed for the Sukhoi Su-24 attack aircraft, including a new computer, a new navigation system and digital processing for the aircraft’s radar. The upgrade is claimed to greatly increase navigation accuracy and bomb delivery. A SVP-24-22-equipped Tu-22M underwent trials in 2009, and the program has been ordered into production, with deliveries from 2012. 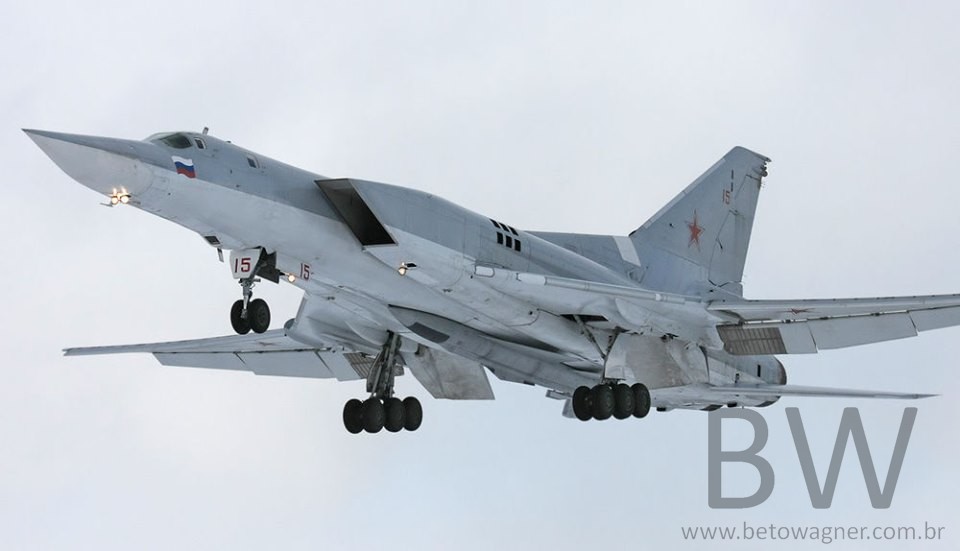 The two prototypes Tu-22M(0) were delivered to Long Range Aviation‘s 42nd Combat Training Centre at Dyagilevo (air base), near Ryazan, in February 1973. The aircraft began practice sorties in March. Within 20 days of the aircraft’s delivery, the air and ground crew at the air base had received their type ratings; this was helped by their earlier training at Tupolev, the Gromov Flight Research Institute and the Kazan plant.[17] In June that year, the aircraft were demonstrated to Soviet government officials, destroying tanks and armoured personnel carriers.[17]

The Tu-22M was first unveiled in 1980 during the aircraft’s participation in a major Warsaw Pact exercise. During the exercise, naval Tu-22M2s conducted anti-ship operations by mining parts of the Baltic Sea to simulate an amphibious landing. The exercise was extensively covered by the press and TV media. In June 1981, four Tu-22Ms were intercepted and photographed by Norwegian aircraft flying over the Norwegian Sea.

The first simulated attack by the Tu-22M against a NATO carrier group occurred between 30 September and 1 October 1982. Eight aircraft locked onto the U.S. task forces of USS Enterprise and USS Midway which were operating in the North Pacific. They came within 120 mi (200 km) of the task forces. The reaction of the U.S. Navy was thought to have been restrained during this event so as to allow the observation of the Tu-22M’s tactics. The bomber also made attempts to test Japan’s air defense boundary on several occasions.

The Tu-22M was first used in combat in Afghanistan. It was deployed December 1987 to January 1988, during which the aircraft flew strike missions in support of the Soviet Army‘s attempt to relieve the Mujahideens‘ siege against the city of Khost. Two squadrons of aircraft from the 185th GvBAP based at Poltava were deployed to Maryy-2 air base in Turkmenistan. Capable of dropping large tonnages of conventional ordnance, the aircraft bombed enemy forts, bases and material supplies.[22] In October 1988, the aircraft was again deployed against the Mujahideen. Sixteen Tu-22M3s were used to provide cover to Soviet forces that were pulling out of the country. The Tu-22Ms were tasked with destroying paths of access to Soviet forces, attacking enemy forces at night to prevent regrouping, and to attack incoming supplies from Iran and Pakistan. Working alongside 30 newly arrived MiG-27s, the aircraft also flew missions aimed at relieving the besieged city of Kandahar.[23][24] The aircraft had its last Afghan operation in January 1989 at Salang pass.[25]

The Tu-22M suffered from widespread maintenance issues during its service with the Soviet forces. These stemmed from poor manufacturing quality. The engines and airframes in particular had low service lives.[26] The Air Force at one point sought to prosecute Tupolev for allegedly rushing the inadequate designs of the Tu-22M and the Tu-160 into service.[27] This was compounded by the government bureaucracy, which hampered the provision of spare parts to allow the servicing of the Tu-22M. With some aircraft grounded for up to six months, the mission-capable rate of the aircraft in August 1991 was around 30–40%.