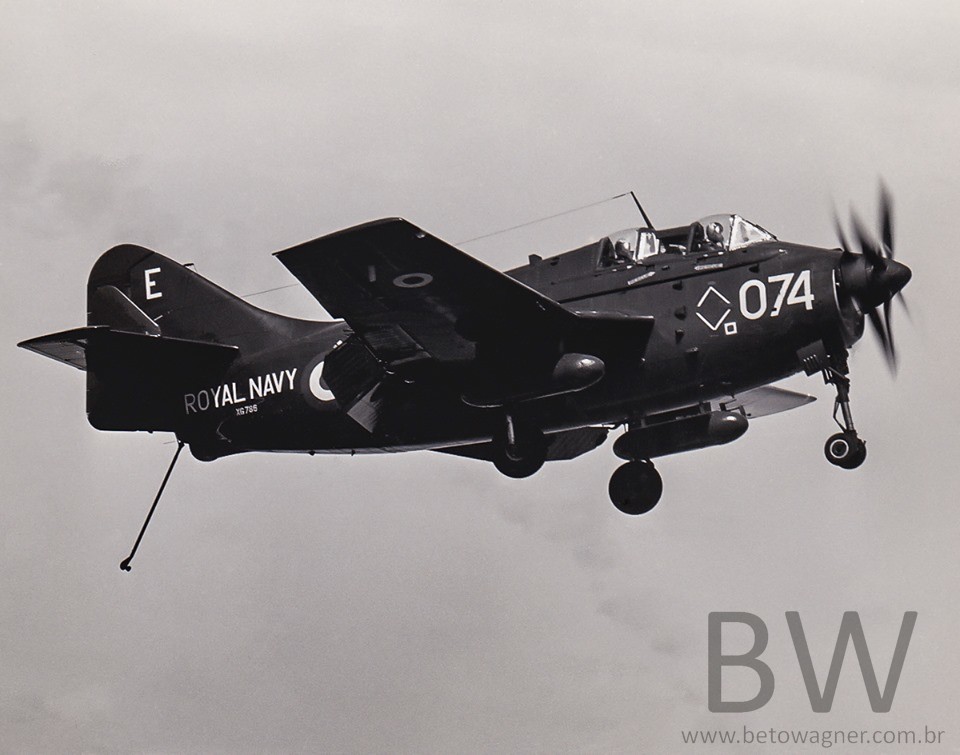 This is the story of the British warbird nicknamed “Janet,” the world’s first dual-control prototype XT752 Fairey Gannet. While the single control version came out a year earlier, Janet herself is now the world’s last flying Fairey Gannet and T5 model (First Royal Navy designation: WN365; later changed to XT752.)

Manufactured 1954 by the Fairey Corporation and named after one of the world’s fastest sea birds known for its dive-bombing skills on unsuspecting fish, XT752 herself is a wonder to behold. Tasked as a sub-hunter and Electronic Warning bird during the cold war, Janet began life as the T.2 trainer prototype, and later rebuilt by the factory as the first T.5 type. She bounced around in ownership between the British Royal Navy, the Indonesian Navy and the Fairey Corporation, finally ending service as the world’s last Gannet to land aboard an aircraft carrier, the Ark Royal, in 1978. In August, the old gal turned 60. 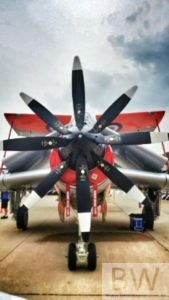 Designed to nest aboard older British aircraft carriers, Janet sports several ingenious design features. At first glance, she looks like a beefed-up singe-engine warbird, like a Thunderbolt on steroids, with Corsair wings. But everything about Janet’s looks are deceiving, beginning with the engine systems themselves. Through a planetary gear box, twin fuselage-mounted Mamba turbine engines power two nose-mounted propeller blades. Sharing a coaxial shaft, the props spin opposite—and completely independent of—each other. Each engine drives its own propeller independently; power cannot be transferred or shared. This allows for one engine/prop combo to be shut down inflight during sub hunts to “loiter” over the search area. In this configuration, the Gannet burns a mere pound of fuel per mile. 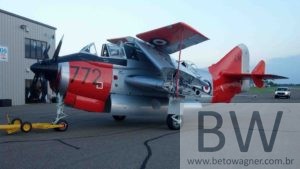 Technological wonder number two, the amazing folding wings. Designed for carrier use, the Gannet’s wings fold, not once, but twice, into a Z-pattern. 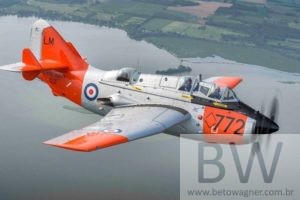 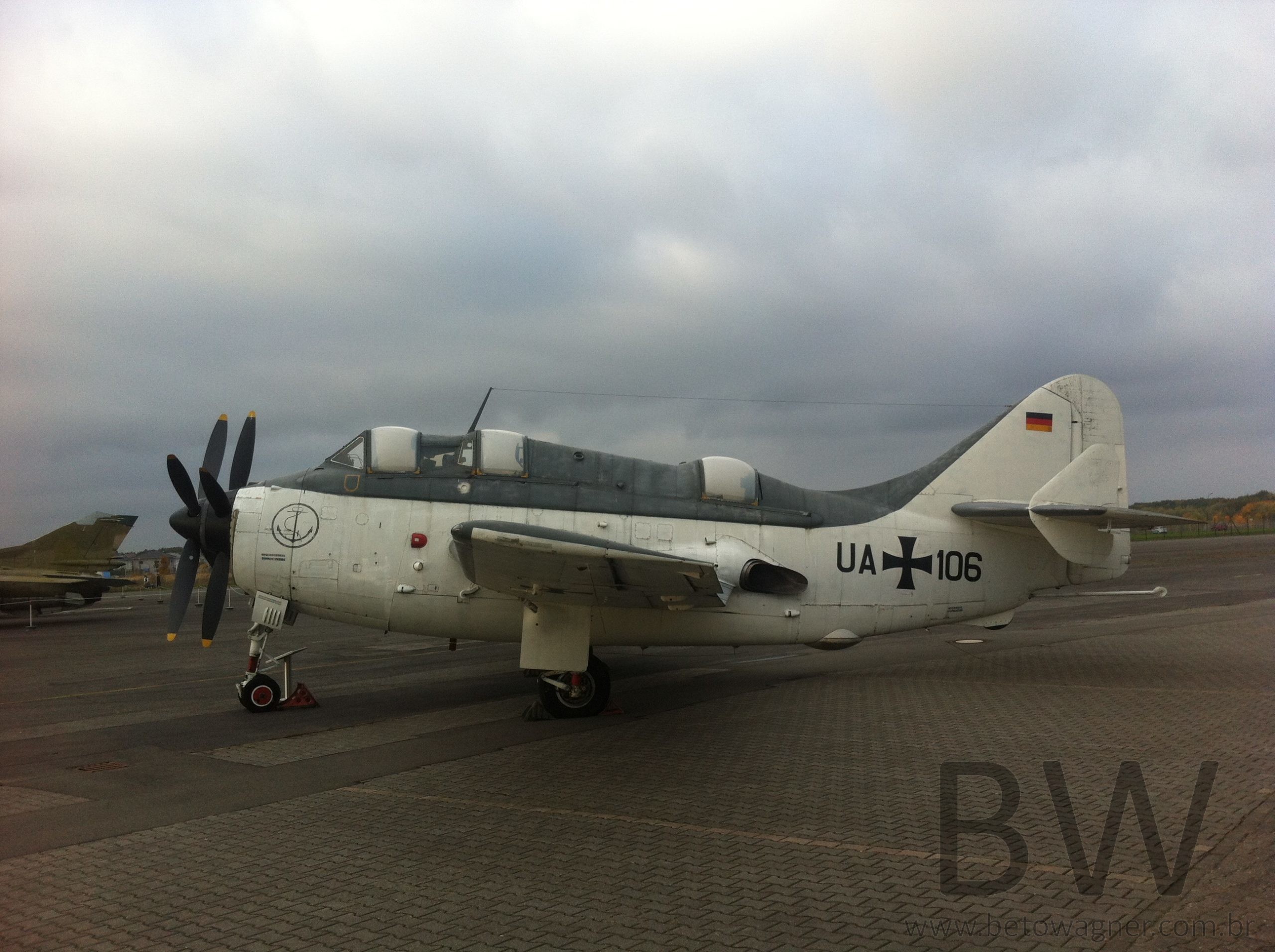 As mentioned, the Gannet could also be configured for electronic warfare and early warning detection. While the Gannet never saw combat, history experts generally agree that, had the Gannet not been retired due to short-sighted budget cuts, the Falklands war may have had a very different—and much less disastrous—outcome for Britain. 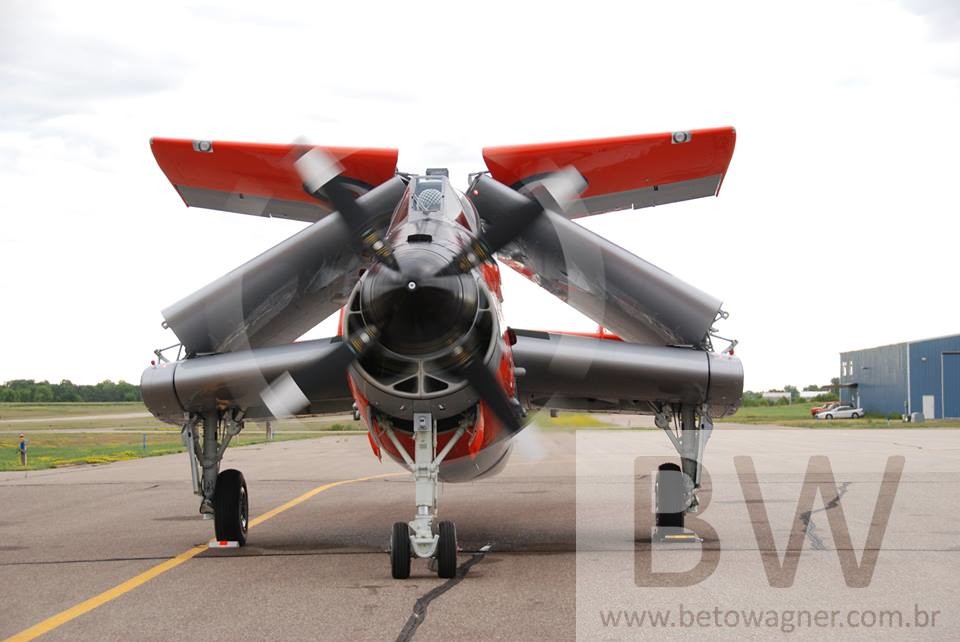 Owner Shannan Hendricks purchased the Gannet in 2004, and along with pilot Harry Odone—now the world’s only current, type-rated Fairey Gannet pilot—have refurbished the plane to flying condition. While the Royal Navy’s obsession with paint kept the old gal corrosion-free, stripping away the layers proved a challenge requiring six months and 2.5 tons of soda blasting. A fully restored Janet now sports a shiny new silver-and-orange paint scheme, reflecting her exact Navy colors and markings when she retired in 1978. 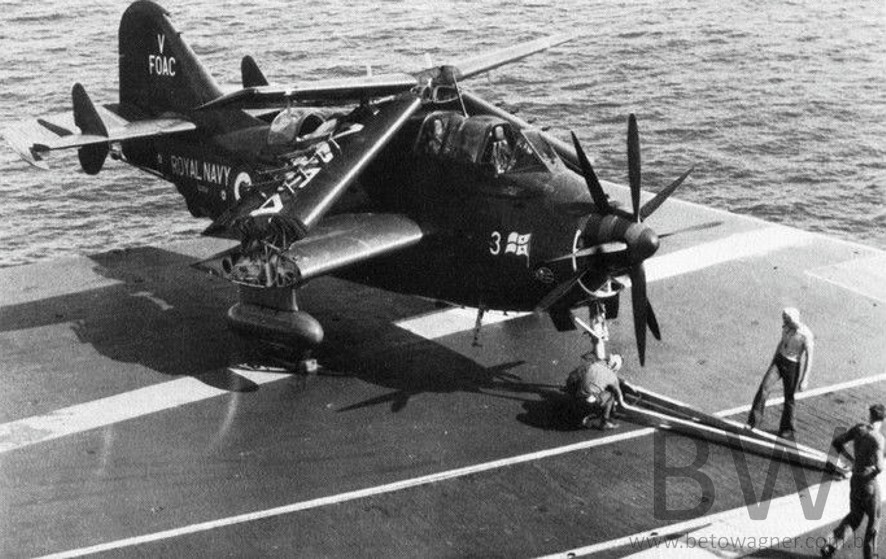 But Janet’s road back to the sky has been a long and winding one. She was nearly sidelined in Goose Bay, Canada when spare parts were stolen, resulting in a legal chase for their recovery. Fortunately, she was rescued by an Antonov 124 and flown to KMSP—a story featured in an episode of National Geographic’s “Monster Moves.”

On August 9, 2013, the newly-restored Janet spread her Z-wings and took to the skies once again.

Tech specs aside, there’s simply something about Janet that draws a crowd at every event she graces, a charm that has won over legions of fans, just by her stately presence. Can one fall in love with an airplane? We’ll let you decide for yourself. Sit back, relax, and enjoy the magical journey of the old gal herself.

Ladies and gentlemen, we give you Janet, the world’s last flying Fairey Gannet.